Add A Dependency/Link Between Tasks

To have a task’s start date determined by the completion date of a previous task, a task can be made “dependent” on the prior task. Dependencies can only be added after a task has been created. The dependencies column has the ↳ symbol in the header row.

To create a dependency for a task (linking its START date to the END date of a previous task), click the box in the dependencies column on the row of the latter task. The dependencies box will open.
The list of the tasks displays within the current project. 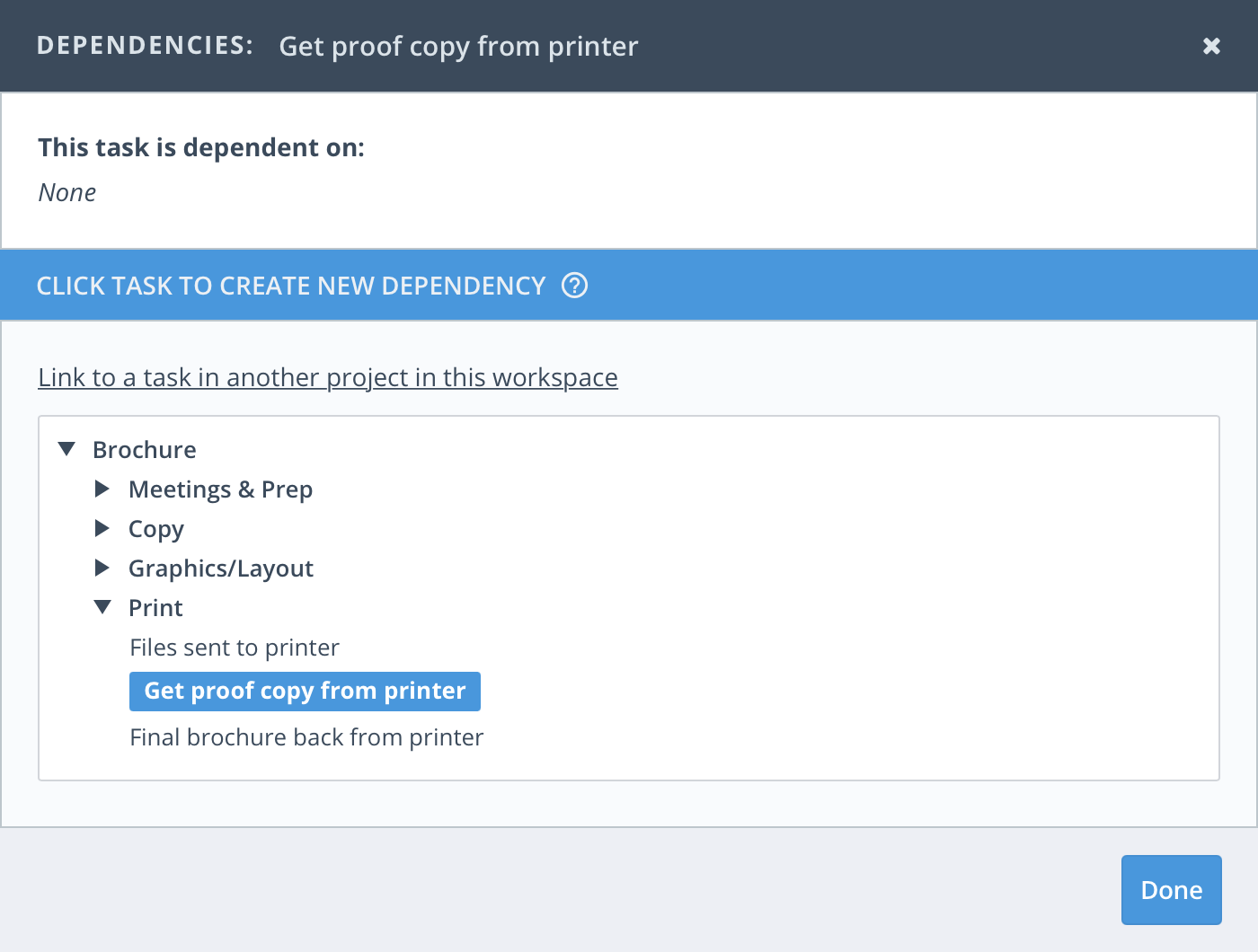 Browse through the task levels by clicking on the arrow to the left of summary tasks (if any). Click the task (or several tasks) on which the current task should be dependent, then click the "Done" button, and the link between the tasks will be added. Other actions, such as deleting dependencies, can also be performed in this window (before clicking "Done).

When hovering the cursor over a task's dependency arrow (that shows when a task has an existing dependency) Workzone colors the background of the predecessor(s) and successor(s) to that task. Predecessors have a pink background, while successor tasks receive a yellow background. Also, a small pop-up frame will display clickable links for that same hovered task's predecessor(s) and successor(s). Clicking these links will scroll to and highlight the selected task.

To delete an existing task dependency, from the List or Gantt view, click on the dependency icon on the task row (the ↳ symbol). In the next box, under This task is dependent upon: click the x next to the task(s) you wish to unlink, then click "Done". Other actions, such as adding dependencies, can also be performed in this window (before clicking "Done). 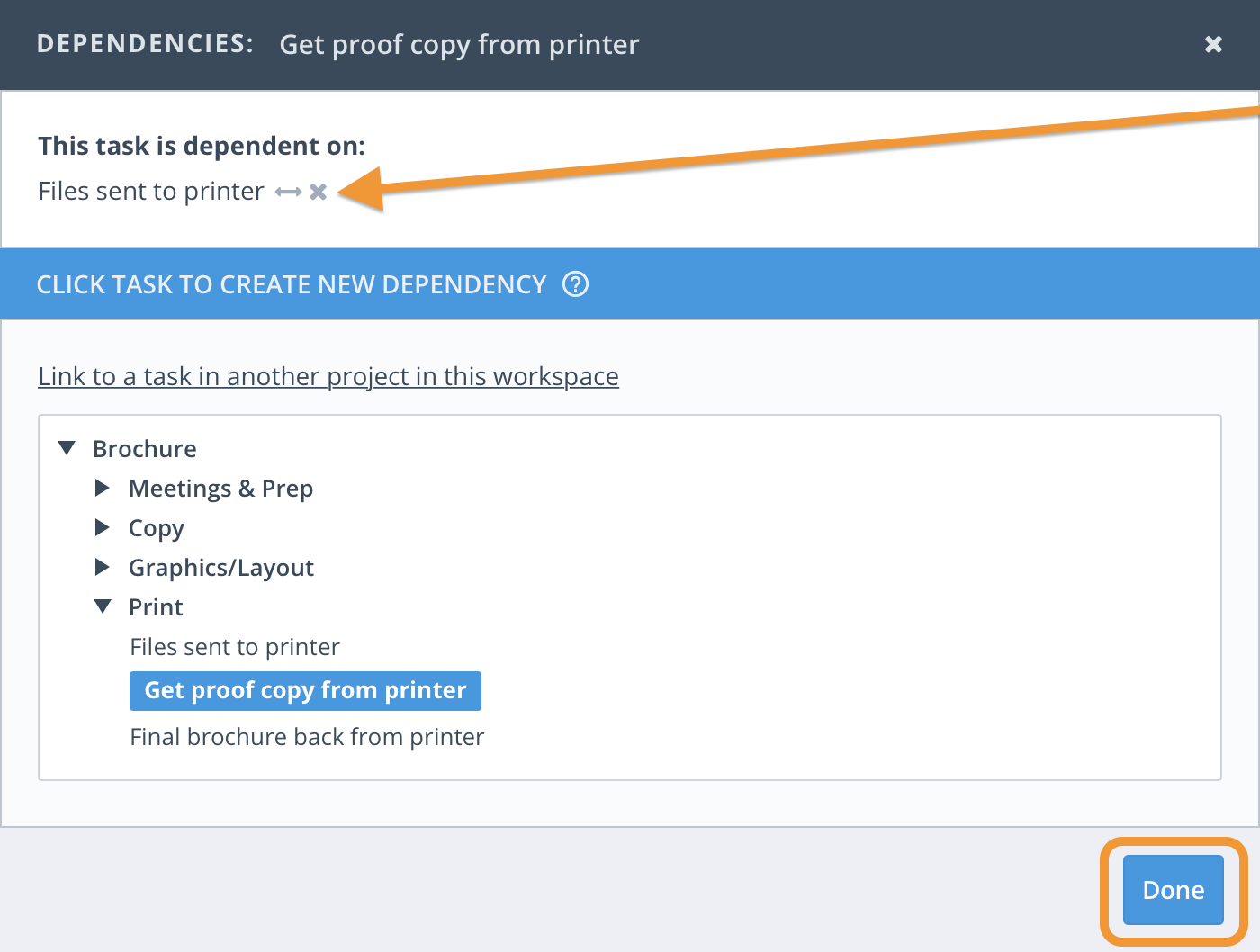 Highlight When Predecessor Is Late

The dependency symbol for a task will show a pink background if a task it is dependent on is late. This applies only to tasks that are directly dependent on the late task (not all subsequent downstream tasks).

The responsible user(s) for a downstream task can be sent an automatic email notification when a task upon which the downstream task is dependent is late. This is set for a particular workspace under settings on the Auto-notifications page.

NOTE: Dependencies notifications can also be sent when a task upon which the downstream task is dependent is marked complete.

Link Multiple Tasks At Once

The system can automatically create dependency links between a list of tasks, keeping their current order, so that one task will begin when the previous task ends.

NOTE: This can only be done for independent tasks (no dependencies either for the task or the task’s parent) at the same level within the project.

From the main Projects area, click the checkboxes to the left of the tasks that you would like to link together, then click the Link Tasks button at the top. The system will create dependencies between the selected tasks. 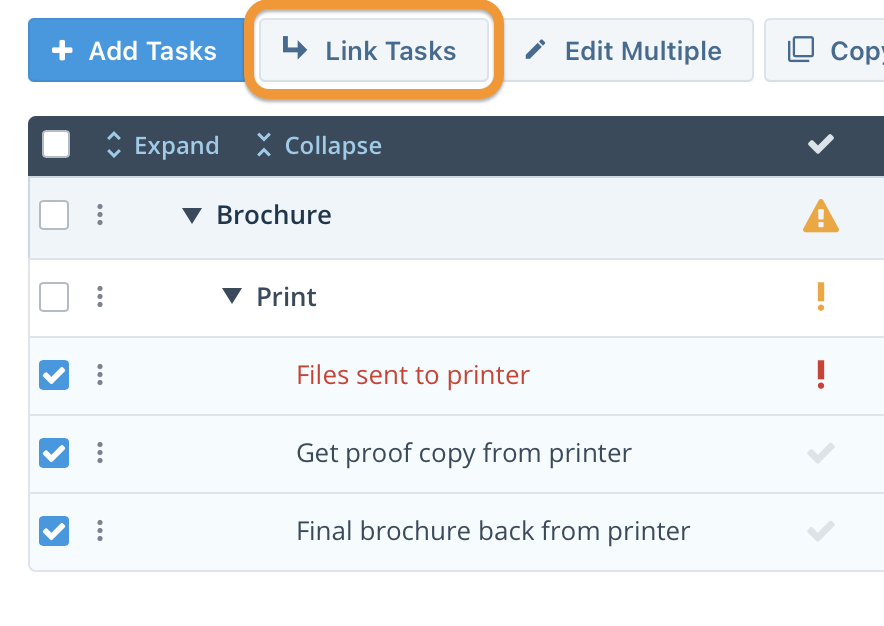 NOTE: Tasks for which dependency links are removed will be converted to independent tasks with the start and end dates they had before the dependencies were removed.

Sometimes, the next task doesn’t start immediately after the previous task has finished, for example, once the photos are sent for print, the printer has a 5-day turn-around on proofs, so a 5-day delay can be built in to accommodate. It’s also possible to have negative ‘lag’, known as ‘lead' time. As an example of lead time, the food for the open house must be ordered 5 days prior to the open house. A 5-day lead time will ensure that, even if the date of the open house moves, the task to order food always comes 5 days before.

Click here for more details on using Lead and Lag

In instances when one project may rely on specific tasks in another project, Workzone provides a way of linking those tasks as dependent, even across projects. For example, a campaign that has several projects in different mediums may first rely on design work being completed in an altogether separate project. Cross-Project Dependencies are an Enterprise-only feature.

Did this answer your question? Thanks for the feedback There was a problem submitting your feedback. Please try again later.